Windows on ARM64 with Cloudbase-Init 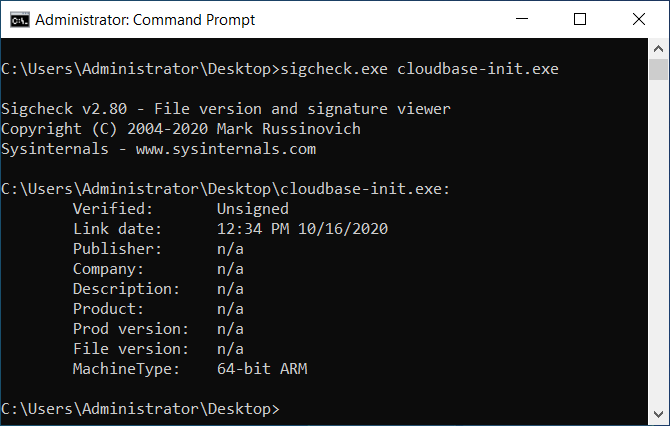 ARM servers are more and more present in our day to day life, their usage varying from minimal IoT devices to huge computing clusters. So we decided to put the Windows support for ARM64 cloud images to the test, with two primary focuses:

Our friends from https://amperecomputing.com kindly provided the computing resources that we used to check the current state of Windows virtualization on ARM64.

Building and running Cloudbase-Init requires going through multiple layers of an OS ecosystem, as it needs a proper build environment, C compiler for Python and Python extensions, Win32 and WMI wrappers, a Windows service wrapper and an MSI installer.

This complexity made Cloudbase-Init the perfect candidate for checking the state of the toolchain ecosystem on Windows ARM64.

EMAG servers come with CentOS 7 preinstalled, so the first step was to have a Windows ARM64 OS installed on them.

As there is no ISO available on the Windows Insiders website, we had to convert the VHDX to a RAW file using qemu-img.exe, boot a Linux Live ISO which had dd binary tool on it (Ubuntu is great for this) on the EMAG server and copy the RAW file content directly on the primary disk.

Rufus was used for creating the Ubuntu Live ISO USB and copying the RAW file to the other USB stick. Note that one USB stick must be at least 32 GB in size to cover for the ~25GB of the Windows RAW file.

Tools used for the dd step:

After the dd process succeeds, a server reboot was required. The first boot took a while for the Windows device initialization followed by the usual “Out of the box experience”.

The following steps show how we built Cloudbase-Init for ARM64. As a side note, Windows 10 ARM64 has a builtin emulator for x86, but not for x64. Practically, we could run the x86 version of Cloudbase-Init on the system, but it would have run very slow and some features would have been limited by the emulation (starting native processes).

Gather information on the toolchain required to build Cloudbase-Init

The Cloudbase-Init ecosystem consists of these main building blocks:

Python 3.x for ARM64 can be built using Visual Studio 2017 or 2019. In our case, we used the freely available Visual Studio 2019 Community Edition, downloadable from https://visualstudio.microsoft.com/downloads/.

The required toolchain / components for Visual Studio can be installed using this vsconfig.txt. This way, we make sure that the build environment is 100% reproducible.

To make the build process even easier, we leveraged GitHub Actions to easily build Python for ARM64. An example workflow can be found here: https://github.com/cloudbase/cloudbase-init-arm-scripts/blob/main/.github/workflows/build.yml.

Python setuptools is a Python package that handles the “python setup.py install” workflow.

The following patches are required for setuptools to work:

Installation steps for setuptools (Python and Visual Studio are required):

Python’s wheel package is required to build wheels. Wheels are the pre-built versions of Python packages. There is no need to have a compiler to install the package from source on the exact system version the wheel has been built for.

The patch introduces two binaries required for ARM64, which were built from: https://github.com/ader1990/simple_launcher/tree/win_arm64

This patched version of pip can use the wheel to create proper binaries for ARM64 (like setuptools).

Python PyWin32 package is a wrapper for (almost) all Win32 APIs from Windows. It is a behemoth from the source code perspective, with Cloudbase-Init using a limited amount of Win32 APIs via PyWin32.

The following patches are required:

Installation steps for PyWin32 (Python 3.8 and Visual Studio 2019 are required):

The build process takes quite a lot of time, at least half an hour, so we took a(nother) cup of coffee and enjoyed the extra time.

The patches hardcode some compiler quirks for Visual Studio 2019 and remove some unneeded extensions from the build. There is work in progress to prettify and upstream the changes.

Now, as all the previous steps have been completed, it is time to finally build Cloudbase-Init. Thank you for your patience.

Installation steps for Cloudbase-Init (Python and Visual Studio are required):

After the installation steps were completed, the cloudbase-init.exe AMR64 executable wrapper will be available.

Cloudbase-Init usually runs as a service at every boot. As cloudbase-init.exe is a normal executable, it needs a service wrapper for Windows. A service wrapper is a small program that implements the hooks for the Windows service actions, like start, stop and restart.

For an easier build process, a GitHub actions workflow file can be found here: https://github.com/ader1990/OpenStackService/blob/arm64/.github/workflows/build.yml

A prebuilt release binary for OpenStackService ARM64 is available for download here: https://github.com/ader1990/OpenStackService/releases/tag/v1.arm64

Now we are ready to use Cloudbase-Init for guest initialization on Windows 10 PRO ARM64.