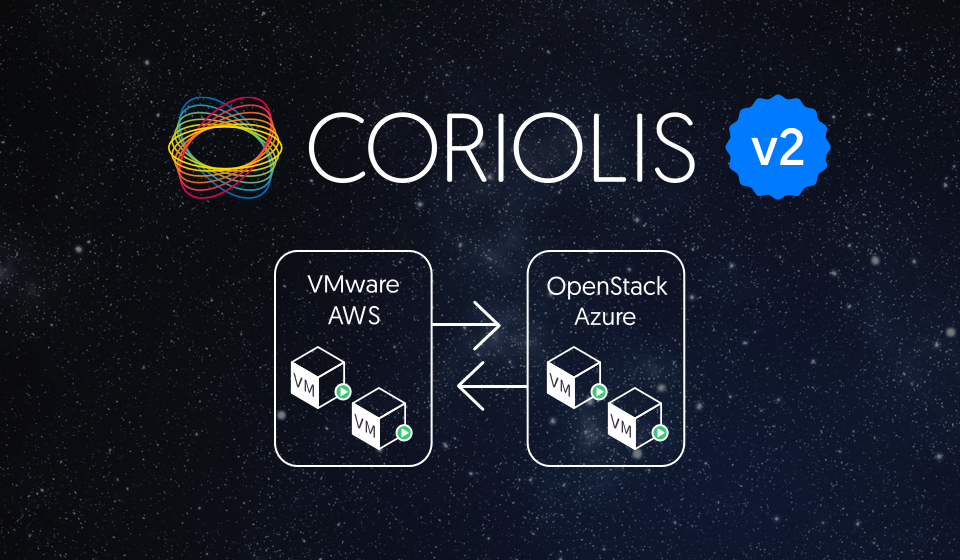 We’re excited to announce that our Coriolis cloud migration project introduced earlier this year just reached a new important milestone. With the addition of new features specifically aimed at business continuity and Disaster Recovery as a Service (DRaaS), Coriolis now offers both one-off migrations as well as constantly up to date replicas of virtual workloads between different clouds.

Here are the objectives that we set for Coriolis V2:


Coriolis implements all the above requirements by leveraging the available cloud and virtualization technology (e.g. Changed Block Tracking in VMware) and cloud API abstractions (e.g. Cinder Storage Snapshot API in OpenStack) with a scalable and fully automated microservice based architecture.

How can Coriolis migration replicas be created and managed?

Coriolis offers a rich REST API, that can be consumed with our CLI tools, web GUI (coming soon) or any 3rd party tools.
Coriolis identity and authentication are managed via Keystone, which allows a large number of backends including common options like OpenLDAP, Active Directory, Azure Federation, etc.
Source or target cloud credentials can be managed via Barbican, another project originating within the OpenStack ecosystem, for the added security benefits.

Credentials for the source or target clouds can be securely stored in Barbican and safely referenced to Coriolis via their href:

Note: if OpenStack credentials are omitted, the same Keystone token used by Coriolis is employed.

Replica configurations can be easily managed with the following commands:

A replica can be executed at any time, e.g. on a weekly, daily or hourly basis, or even continuously:

The replica execution is fully asynchronous and divided in multiple steps, each of which may be monitored with:

During the first execution, a full data replication is performed while subsequent runs involve only the changes that occurred since the previous successful replica execution.

Optionally, you can also automatically shutdown the source VM before the replication starts by adding the “–shutdown-instances” command line option.

The replica process may involve the creation of temporary resources (such as virtual machines and volumes) both on the source and target infrastructures similar to what may be seen in the following replica execution output snippet:

The replication process will perform an app consistent snapshot on the guest OS when available (e.g. VMware quiescing). This ensures that the replicated data is application consistent in case of transactional activities running in the guest OS (e.g. Oracle, MS SQL Server, Exchange Server, etc).

How to start a replicated VM on the target cloud

Here’s where Coriolis truly excels: getting virtual machines to run across a wide range of hypervisors and clouds. Replicating the content of a VM is just a part of the process, getting the machine to actually run on the target cloud also requires actions particular to the underlying target hypervisor and cloud deployment tools. For example, some guest operating systems will require specific synthetic drivers to run in the best possible way on each of the individual hypervisors such KVM, ESXi or Hyper-V, while OpenStack needs cloud-init / cloudbase-init configured for proper guest initialization, Azure the WALinuxAgent, etc. All the required steps are fully automated and transparent for the user.

Once the replication is completed, the source environment becomes redundant thanks to the replica made available on the destination cloud. Thus, in the event of an actual disaster (the source VM became deleted, corrupted, etc), we may quickly bring the system back up on our target cloud with minimal loss to continuity.
The following command will snapshot the migrated disks / volumes and start the migration process asynchronously:

What about testing the replicated workloads?

One important requirement consists in periodically testing the replicated workloads on the destination cloud. This can be easily done with Coriolis, even while the replicated resources on the source environment continue running unaffected. This also opens the way for numerous testing scenarios (e.g. integration / functional / white box / black box) to be performed on the replicated workloads at anytime, reassuring that the workloads will operate as expected and lead to a smooth recovery in the event of an emergency.

What are the supported guest operating systems?

One of the advantages of Coriolis is that the replica is guest OS agnostic, so differences between guest operating systems come only into play when performing the migration. Coriolis supports migrations for all Windows versions (Windows Server 2008, 2008 R2, 2012, 2012 R2, 2016 including Nano Server, Windows 7, 8, 8.1, 10), Ubuntu 12.04 and above, RHEL / CentOS 6.x and 7.x, SUSE SLE 11 and 12, openSUSE, Debian and Fedora. Support for other Linux distributions can also be added on demand.

How can you deploy Coriolis?

Just contact us for pricing and additional info! We are also offering a demo appliance that can be easily deployed on your environment for evaluating Coriolis!