We are happy to announce the availability of Open vSwitch 2.5 (OVS) for Microsoft Hyper-V Server 2012, 2012 R2 and 2016 (technical preview) thanks to the joint effort of Cloudbase Solutions, VMware and the rest of the Open vSwitch community.

As usual, we also released an MSI installer that takes care of the Windows services for ovsdb-server and ovs-vswitchd daemons along with all the required binaries and configurations.

All the Open vSwitch code is available as open source here:

The entire installation process is seamless. Download our installer and run it. You will be welcomed by the following screen: 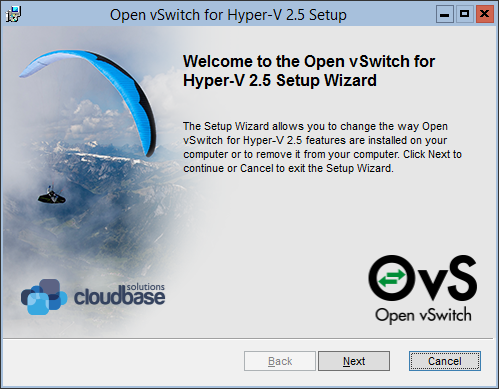 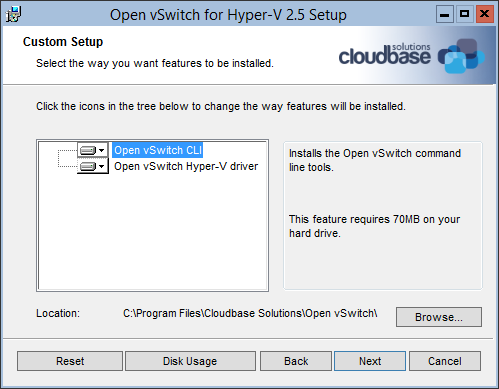 Click “Next” followed by “Install” and the installation will start. You will have to confirm that you want to install the signed kernel driver and the process will be completed in a matter of a few seconds, generating an Open vSwitch database and starting the ovsdb-server and ovs-vswitchd services.

The installer also adds the command line tools folder to the system path, available after the next logon or CLI shell execution.

Fully unattended installation is also available (if you already have accepted/imported our certificate). This helps to install Open vSwitch with Windows GPOs, Puppet, Chef, SaltStack, DSC or any other automated deployment solution:

Let us assume that we have the following environment: a host with four Ethernet cards in which we shall bind a Hyper-V Virtual Switch on top of one of them.

Create a Hyper-V external virtual switch with the AllowManagementOS flag set to false.

To verify that the extension has been installed on our system:

We can now enable the OVS extension on the vSwitch virtual switch:

Please note that when you enable the extension, the virtual switch will stop forwarding traffic until it is configured (adding the Ethernet adapter under a bridge).

Let us talk in more detail about the two commands issued above.

will add a new adapter on the host, which is disabled by default:

This adapter can be used as an IP-able device:

will allow the bridge to use the actual physical NIC on which the Hyper-V vSwitch was created (port1).

Users from Linux are familiar with the setup above because it is similar to a linux bridge.

OpenStack is a very common use case for Open vSwitch on Hyper-V. The following example is based on a DevStack Mitaka All-in-One deployment on Ubuntu 14.04 LTS with a Hyper-V compute node, but the concepts and the following steps apply to any OpenStack deployment.

Let us install our DevStack node. Here is a sample local.conf configuration:

After DevStack finishes installing we can add some Hyper-V VHD or VHDX images to Glance, for example our Windows Server 2012 R2 evaluation image. Additionally, since we are using VXLAN, the default guest MTU should be set to 1450. This can be done via DHCP option if the guest supports it, as described here.

Now let us move to the Hyper-V node. First we have to download the latest OpenStack compute installer:

Full steps on how to install and configure OpenStack on Hyper-V are available here: OpenStack on Windows installation.

In our example, the Hyper-V node will use the following adapter to connect to the OpenStack environment:

This is the internal adapter bound to the vSwitch virtual switch, as created during the previous steps (ovs-vsctl add-br br-port1).

We can now verify our deployment by taking a look at the Nova services and Neutron agents status in the OpenStack controller and ensuring that they are up and running:

Next we can disable the Windows Hyper-V agent, which is not needed since we use neutron Open vSwitch agent.

From a command prompt (cmd.exe), issue the following commands:

We need to create a new service called neutron-ovs-agent and put its configuration options in C:\Program Files\Cloudbase Solutions\OpenStack\Nova\etc\neutron_ovs_agent.conf. From a command prompt:

Note: creating a service manually for the OVS agent won’t be necessary anymore starting with the next Nova Hyper-V MSI installer version.

Now if we run ovs-vsctl show, we can see a VXLAN tunnel in place:

After spawning a Nova instance on the Hyper-V node you should see:

The VM instance-00000003 got an IP address from the neutron DHCP agent, with fully functional networking between KVM and Hyper-V hosted virtual machines!

This is everything you need to get started with OpenStack, Hyper-V and OVS.

In the next blog post we will show you how to manage Hyper-V on OVS without OpenStack using a VXLAN tunnel.